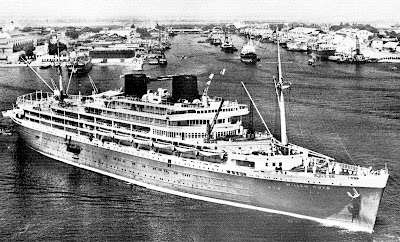 A scan of a newspaper picture of the Dutch passengerliner "Willem Ruys", owned by the Royal Rotterdam Lloyd of Rotterdam, the Netherlands, flag the Netherlands. Build at the "De Schelde" Scheepswerf in Vlissingen, the Netherlands. The keel of yard number 214 was laid down in January 1939. Due to the outbreak of the war the construction was halted and she remained on the slipway. First the Germans tried to bomb the vessel, buth then they continued the construction, which was sabotaged a few times by the Dutch resistance. The rusting hull survived the war and it was decided to complete her, becoming a matter of national pride. On the 1st of July 1946 she was launched and christened "Willem Ruys", named after the great-grandson of the founder of the Royal Rotterdam Lloyd, who was shot by the Germans on the 15th of August 1942, together with two other citizen of Rotterdam, after having been taken as hostages in retaliaton for an attack on the railways near Rotterdam. On the 2nd of December 1947 the "Willem Ruys", grt. 21.119, l.o.a. 192.43 mt. set out on her maiden trip from Rotterdam to the Dutch East Indies (Indonesia) and became the most popular liner on the Indonesia route.

When you became interested in this most popular liner, the SCALDIS CARDBOARD MODELCLUB in the Netherlands has a beautiful and detailed model of this fine ship, and of many other famous and less famous ships as well. Visit their web page at:
www. scaldismodelclub.nl.