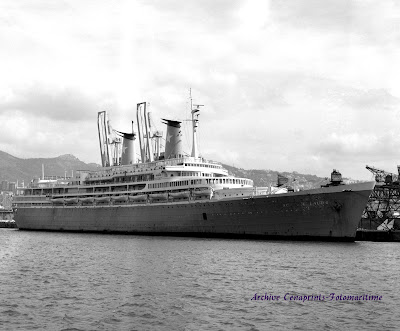 m.v. "Achille Lauro", ex Willem Ruys '64, owner Achille Lauro Armatore, Naples, Italy, flag Italy. Build 1947 at the Schelde Shipyard, Vlissingen, the Netherlands. Rebuilt and modernised at the Cantieri Navali Reuniti, Palermo, Italy. The work was deleayed by an explosion and resulting fire. On May 19, 1972 the vessel was badly damaged by fire during an overhaul in Genoa.

The vessel is here pictured afted she returned to Italy and a short lay-up in the port of Genoa after the hijacking by Palestinian terrorists.