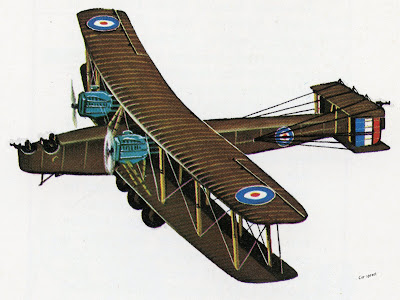 HANDLEY PAGE V/1500
This was the first British built 4-engine aircraft, and it was also the largest plane of the First World War, the first strategis bomber.
Built on orders of the Air Ministery it was never used in combat.Before the
Armistice only three of these giant planes had been built and delivered to the
fighting units.
It could carry thirty 250-pound bombs or two 3300-pound bombs.
It was the forerunner of the WW II Halifax and Lancaster bombers.