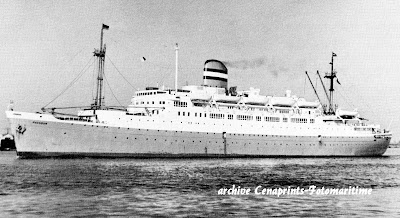 s.s. "Maasdam".
Owner Nederlandsch-Amerikaansche Stoomvaart Maatschappij (Holland Amerika Lijn),
Rotterdam, the Netherlands.
Flag the Netherlands.
Built by N.V. Dok- en Werfmaatschappij Wilton-Fijenoord, Schiedam, the Netherlands.
Grt. 15.024, nrt. 8.976, dwt. 7.057, l.o.a. 152.00 mt., beam 21.10 mt.
Together with her twin sister, the ss. "Ryndam", the "Maasdam" was originally planned  as a passenger- cargo vessel. The "Ryndam"  would be named "Dinteldyk" and the "Maasdam" was going to be the s.s."Diemerdyk.
Before the building started the management of the Holland Amerika Lijn decided to order the vessel as a
passenger liner.
The engines remained as planned, 2 cross compound General Electric steam turbines, which were built in 1945. They developed 8.500 shp double-reduction geared to a single screw. Service speed was slow compared with other cross-atlantic steamers, just 16.5 knots. The crossing from the United Kingdom to the U.S. east coast took eight days. The daily fuel consumption however was just 53 tons, making the twins
exceptionally economic to operate.
Both the "Rijndam" and the "Maasdam" revolutionised passenger shipping on the Atlantic. Up to that time most ships were divided into three classes. First class having the lion's share of the accomodation and Tourist class being the least favoured. The "Maasdam" and the "Rijndam" were virtually all Tourist class with only a token 39 passengers carried in a small and exclusive First class section.
They were to prove very succesful and became highly popular, sharing the ocean with some of the greatest
glamour stars in marine history. Together with the "Ile de France", the "America", "United States", the two "Queens" of the Cunard, the Holland Amerika's own "Nieuw Amsterdam" the twins were among the galaxy
of ships binding the Old and the New World, but it was with the scream of the jet engine that all that suddenly shuddered to a halt and one by one these wonderful ships were withdrawn from service and either
converted for cruising or sent to the breakers, never to be replaced.
The "Maasdam" and the "Rijndam" developed a "Friendly Ship" reputation, making them appealing to students, tourists, emigrants and cultural groups. First class attracted the elite, , who enjoyed sitting high above the Tourist class, in their Penthouse accomodations. We could call this the "snob effect".
The s.s. "Maasdam" made her maiden voyage on August 11, 1952 from Rotterdam via Montreal to New York.
On October 2, 1954, while leaving the Port of New York, she collided with the French m.v. "Tofevo" and was forced to return to that port to have repairs carried out. She left again New York on the 25th of October 1954 to continue her voyage to Rotterdam.
In 1955 she was the first HAL vessel  with Denny Brown stabilizer fins. Both the twins were designed with
a freighter hull which meant that in a little , or rough weather the would pitch and roll, causing some discomfort to passengers with less then sea-legs.
In September 1968 the "Maasdam" was sold to the Polish Polskie Linie Oceaniczne and renamed
"Stefan Batory".
On March 24, 2000, as the "Stefan" the "Maasdam" arrived behind a tug boat in Aliaga, Turkey, to be
broken up.