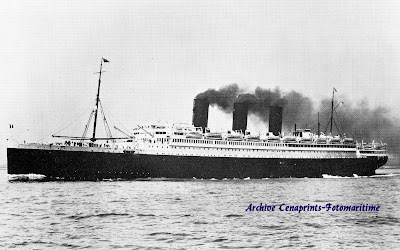 s.s. "Paris", owners Compagnie General Transatlantique, Le Havre, France.
Flag France.
Built by Chantiers Nav. Penhoet, St. Nazaire, France. The keel was laid in 1913 but halted athe outbreak of the war in 1914. In 1916 however it was decided to launch the ship in order to free the slipway for more urgent work. On the 12th of September in that year the vessel was launched, towed to Quiberon and laid up for the duration of the war. In 1921 the vessel was completed and on the 15th of June made her maiden voyage from Le Havre to New York.
Grt. 34.569, l.o.a. 233.03 mt.
Engines, Steam Turbines Parsons-Penhoet, 4 screws, 46.000 shp, speed max.
22.4 kn.
Vessel type Passenger