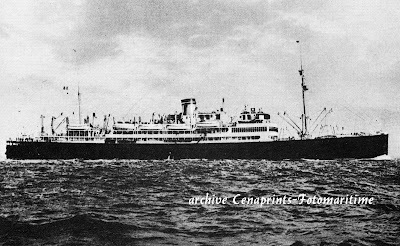 m.v. "Virgilio".
Owner Navigazione Generale Italiana, Genova, Italy.
Built 1928 by Cantieri ed Officine Meridionali, Baia (Napoli), Italy.
Flag Italy.
Grt. 11.718, l.o.a. !54.22 m, beam 18.84 m.
Engine type Motor, Burmaister & Wain, 6.600 bhp., speed max. 15 knots.
Vessel type Passenger.
Vessel was launched in December 1926, completed in April 1928, and was used on the Genova-Valparaiso
service.
In 1932 the NGI joined the "Italia" Flotta Riunite in the amalgamation of NGI with Lloyd Sabaudo and Consulich. From January 1937 it became known as the "Italia" Societa Anonima di Navigazione.
In September 1943 the "Virgilio" was seized at La Spezia by the Germans after the Italian capitulation.
After being badly damaged during an Allied air raid at Toulon in December 1943, in June 1944 the vessel was blown up before the German retreat from Toulon. After the war the vessel was raised and the wreck scrapped.
Posted by C. Sproet at 10:58